If you are visiting Baku, you will surely notice the Maiden Tower – one of the most emblematic sights of Azerbaijan, rising near the shore of the Caspian Sea. The walls are made of thick brick, and the tower contains a total of eight levels. The top can only be reached via a winding staircase, but the view from the top opens to a beautiful panorama of Icheri Sheher, the Caspian Sea, and the rest of the city.

The Temple of Eternal Fire - Ateshgah - is just 10 minutes away with from the Baku Heydar Aliyev. It is well-known practically all over the world. It is located 30 km from the center of Baku in the suburb of Surakhany. This territory is known for such unique natural phenomenon as burning natural gas outlets (underground gas coming onto surface contacts oxygen and lights up). The temple in its present state was constructed in the 17th-18th centuries. It was built by the Baku-based Hindu community.

Yanardag is a natural gas fire which blazes continuously on a hillside on the Absheron Peninsula on the Caspian Sea near Baku. Flames jet into the air 3 metres from a thin, porous sandstone layer. Administratively, Yanar Dag belongs to Absheron District of Azerbaijan.

Museum of Petroglyphs is another name for Gobustan - a mountainous place in the southeast of the Major Caucasian ridge located 60 km from Baku. The archaeologists found there the ancient sites of primitive people who left behind numerous rock drawings - Petroglyphs.

40 kilometers from Baku there is Gala, the well-known open-air historical and ethnographic museum. The museum, founded in 2008 at an archaeological site located in the same-name village, is dedicated to the history of the Absheron Peninsula. 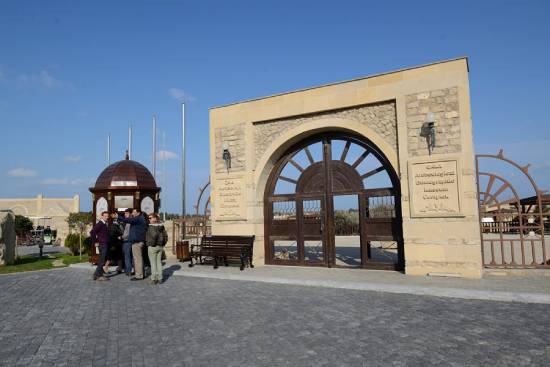 The history of Icherisheher dates back to ancient times. It is difficult to determine the exact date in history when the city was built by our ancestors, but it has existed for thousands of years which is evidenced by the many ancient monuments which still remain today.