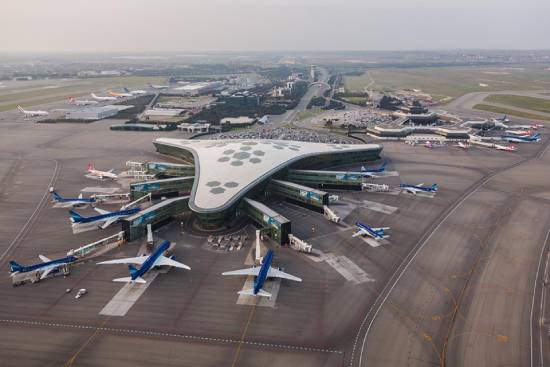 Ways to get to Baku

Baku Heydar Aliyev international airport (GYD) is one of the six international airports serving Azerbaijan. Airport is approximately 25km east of Baku Olympic Stadium. Travelling time is about 40 minutes. Airport is linked to the city by two modern highways commissioned in 2008 and 2009. There are duty-free shops in the airport’s international terminal. Unlike most other international airports, there are shops not only in the departures but also in the airlines transferring through Europe, Asia, America arrivals area. Payments are accepted by credit card, and can be also made in Azerbaijani Manats, US Dollars, Euros and Russian Rubles. Baku’s main airport is served by multiple airlines transferring through Europe, Asia, America every day.

Azerbaijan has railway communication with a number of Post-Soviet cities. You can travel to Baku and back by train from such cities as Tbilisi, Makhachkala, Moscow, Tyumen, Rostov, Kharkov and etc. More details about the routes and train schedule are provided at the official website of “Azerbaijan Railways” JSC.

Azerbaijan has passenger bus communication service with cities of Russian Federation, Georgia, Turkey and the Islamic Republic of Iran. International passenger service is operated from Baku International Bus Terminal, located at the city entrance. More information about the tariffs, as well as the schedule of intercity and international routes can be found at the official website.

By a personal vehicle

Moreover, you can cross the border of Azerbaijan with Russia, Georgia, Iran and Turkey on a personal vehicle. It is by all means convenient to travel across Azerbaijan on a vehicle, provided that you hold an international driver’s license. The country has beautiful roads in the capital, as well as the intercity highways, connecting Baku with all the cities, district centers, settlements, air and marine ports, railway stations, natural reserves, tourist recreation zones, and the foreign country entry points (with neighboring countries).